In 1953, writer and illustrator, Hugh Hefner, incorporated HMH Publishing Co. Inc. in Delaware on October 1st. The first issue of Playboy, a men’s adult entertainment magazine, was published in December of that same year with no cover date because Hefner was unsure if there would be a second issue. However, with Marilyn Monroe on the cover page, it sold more than 50,000 copies and set anticipation for more to come. 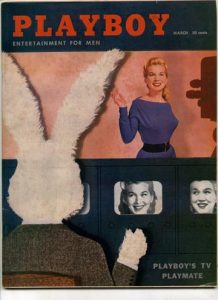 After establishing his publishing company and magazine, in 1955 Hugh Hefner took the Post Office to court and successfully won second-class mailing to get periodical privileges for sending out Playboy magazines to subscribed members. Within the next year, the creation of pinup photography was displayed in the March 1956 issue which featured Marian Stafford [photo right] as the first triple page centerfold (previously a double page spread by pinup model, Bettie Mae Page). Through this creation of pinup photography, women go from being viewed as conservative, almost asexual beings to classy, yet risqué sexualized women who are strictly exist for the male gaze and male sexual satisfaction.

By 1959, Playboy begins to establish themselves in the music industry. First with a venture into television through the variety show Playboy’s Penthouse, that featured cultural icons like Ella Fitzgerald, Carl Sandburg and Lenny Bruce. That same year the Playboy Jazz Festival sold out in Chicago stadium with performances by jazz legends: Louis Armstrong and Duke Ellington. In this aspect, Playboy makes its’ way into the music industry. Something that makes a stronger impact during the early 2000’s with exposed female bodies in music videos, television shows, and fashion. 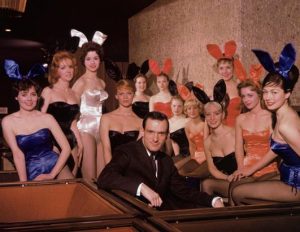 In 1960, the Playboy Bunny was born along with a place to cater to men, the Playboy Club; the first was in Chicago where “keyholder” memberships were sold for perks like drinks, cigarettes, and meals. In 1961, the VIP Issue for Club keyholders debuts. As you could have figured, after almost 10 years of encouraging the sexualization of women Playboy receives criticism from all over America. In 1962, Playboy Philosophy was written by Hugh Hefner in 25 installments in response to this criticism of the magazine’s principles. Later that year, the Playboy Foundation was founded as the activist arms of Playboy Philosophy. With varying opinions of Playboy throughout America, the enterprise expands overseas in 1966 to London with 20,000 keyholders before its’ official Playboy Club opening. The Playboy Club was one of the first gentlemen’s clubs and starts this concept of having a place where men could go to be served and satisfied by women, who are not their own wives (i.e. creating a consistent culture of men being “playboys”).

After the two-season failure of Playboy Penthouse, the company tries to get back in the media and music industry through Playboy after Dark (1968) and even establishing Playboy Productions, motion picture and television division of the company in Los Angeles, California (1969). In 1971, Playboy Enterprises goes public with listings on the New York and Pacific Stock exchanges. Soon enough, Hefner makes enough revenue to become stable with the purchase of a Playboy Mansion in Los Angeles: Holmby Hills, California (current mansion). In 1972, Playboy continues striving forward and expands their monthly subscriptions with Germany as their first international edition. Due to this, the Playboy Club reaches an all-time high of 230,000 keyholders in 1976.

Over the decades, Playboy has tried going digital in various ways. One of the most successful launches was in 1982 of Playboy TV, a national pay cable television service. After 12 years, Playboy expands to 24-hour programming. They become the first national magazine with a website, as the leading entertainment & lifestyle destination for men online. At the turn of the century, Playboy Fashion makes a global debut spreading its’ style across the world. This is an important evolution to note in how Playboy has influenced modern society because not many people read printed copies of Playboy magazine considering the distribution of free pornography and nude photography on the internet, mobile dating apps like OkCupid and Plenty of Fish, and explicit social media content. 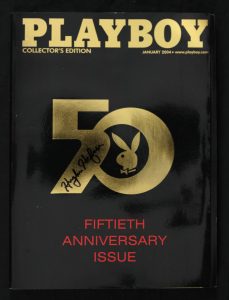 In 2002, Playboy Fashion first debuted in Asia with its first free-standing boutique. The boutique’s success prompts Playboy to continue opening stores throughout the world. In 2003, Playboy’s 50th Anniversary is celebrated with a special collectors’ issue of the magazine, release of limited-edition Playboy products, and exclusive parties at the Mansion and New York Armory. In 2005, The Girls Next Door premieres on E!, where three women travel to California in pursuit of becoming personal Playmates to Hugh Hefner. This show creates a framework for the way we look at reality television with later shows having similar themes like Flavor of Love (2006) and Rock of Love with Bret Michaels (2007).

In 2010, Playboy celebrates its 50th Anniversary of the Playboy Bunny and the Playboy Club with 50 parties in 50 cities around the world and an opening of Playboy Club Cancun. In the next couple of years, Playboy decides to make some returns with the Playboy Club returning to London (2011) and the Playboy Global Headquarters coming back to Beverly Hills, California (2012). The last celebration was the Playboy 60th anniversary, in 2013, with a special magazine cover photo of English model, Kate Moss.