In Rachel and Miles X-Plain the X-Men Episode 45, “A Woman Who Could Fly,” the casting duo discuss various themes: Forge and the Adversary, the narrative impact of sexualization, the dynamic art stylings of Barry Windsor Smith, and colonialism. These themes are used in a character analysis of Ororo Munroe, better known as Storm, and her role in Uncanny X-Men #198: Life-Death II.

Rachel and Miles are well versed in this topic of discussion. It is very clear that they read the X-Men comics and have the knowledge to be able to properly produce this podcast. They use direct quotes from parts of the comics to assist in their explanation and breakdown of what happened in the story. Whenever they notice a reference to previous comics or the usage of parallels to events in past comics, they make sure to mention it and explain what those details mean in both stories.

As they go through the discussion of Life-Death II, they constantly jump between talking about Storm’s story in that comic and weave in details about comic theory related to the topic. They mention Africa being used like a country rather than a continent, the lack of strong female characters of color in superhero comics, and the liminality of Storm compared to the other X-Men.

Rachel and Miles even go outside of discussing the comics and have a discussion on how Storm has “never been done well in adaptations,” such as in the live-action X-Men movies and the animated television series. The discussion continues into a talk about what actress they feel should best represent the role of Storm in a live-action movie, because they didn’t like Halle Berry’s Storm and aren’t too sure about Alexandra Shipp for the upcoming role of younger Storm in X-Men: Apocalypse, estimated to be released in May 2016.They even created an elevator pitch about how to best convey to film writers and directors exactly who Storm is and how she should be portrayed.

The narrative elements and structure used in this episode of the podcast series, Rachel and Miles X-Plain the X-Men, relate to the text from Chapter One of Basic Elements of Narrative by David Herman. In the chapter, Herman talks about how narrative is defined by creating a communicative interaction to tell a story. This is used in the podcast where Rachel and Miles are conversationally telling the story of Storm and other characters in the X-Men comic series. Narrative is a basic human strategy that we use to share information with our audience whether that audience is one other person, a crowd of people, or a digital audience that could be thousands.

In the chapter, Herman also talks about the distinction between phonetic and phonemic, where phonetic is more about structure and phonemic is more only important to the people studying it. I think this this particular podcast series does a good job of breaking that distinction to make it more mixed where we know that this isn’t a completely random recording and that Rachel and Miles put the time in to come up with a structure, record, edit, and then publish. For that reason it is phonetic. However, it is also phonemic because the audience for X-Plain the X-Men really only pertains to people who love X-Men, want to know more about it, are fans of the movies or just anyone who find it interesting. If the audience and purpose weren’t factors in this type of narrative structure then the podcast would really just be a live recording of people having a conversation and discussing their values about a random topic or whatever comes to mind.

In the end, the podcast series, Rachel and Miles X-Plain the X-Men, provides substantial information about X-Men character, Storm in the Episode 45: “A Woman Who Could Fly” and also serves as a narrative structure that is both phonetic and phonemic according to David Herman’s narrative theory. 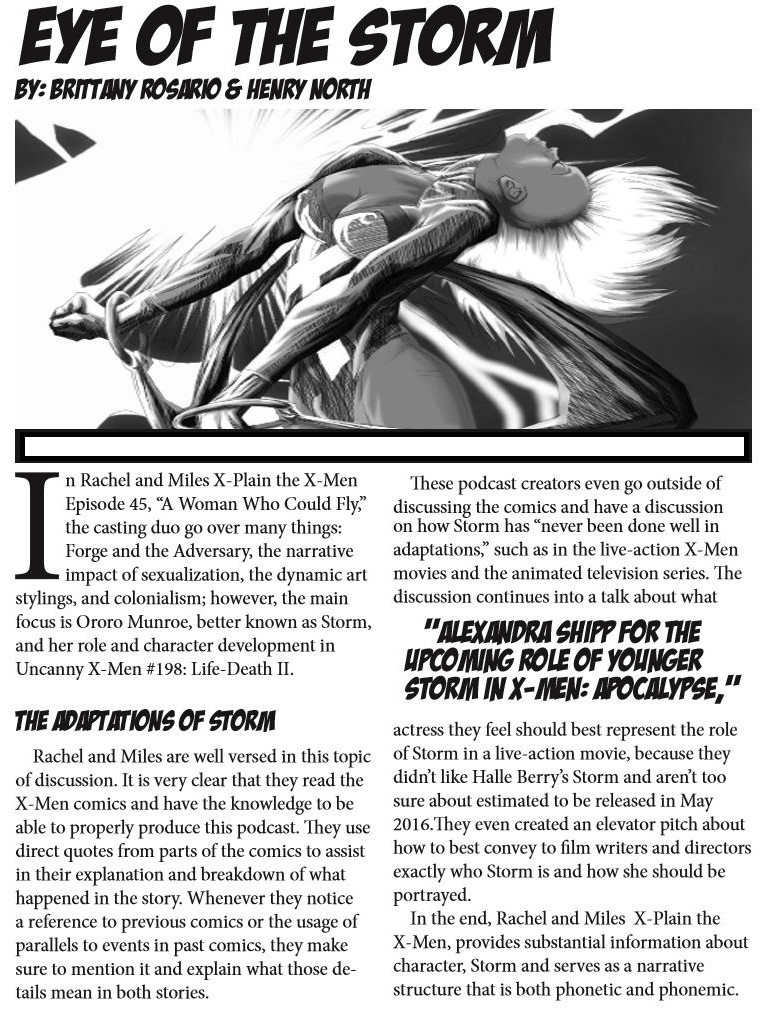