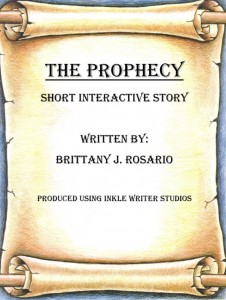 Here is my first and only interactive fantasy story, The Prophecy. The information I’ve provided in this blog is any background information you might want to read before playing to create your story.

Protagonist: No Name (it’s you). Magical being framed for crime at the age of 17, charged as an adult and sent to prison. This character is released after a 15 year sentence and has no idea how to function in the new society.

Story line: You don’t have a place to stay or relatives who you can live with. You are all alone in a place that is separated by city business owners and rural tribes. You take this all as an opportunity to start over and make the best of a clean slate.

The city: Has infrastructure: Skyscrapers, lights, roads, digital billboards, internet and smartphones, very modern day (similar to that of NY or Chicago). These people live in luxurious apartment complexes.

The rural towns: Tribal/primitive: still have some technological advances but really only basic things: landline phones only, indoor plumbing, but no internet. These people live much humbler lives in log cabins in the forest to keep their magic sacred from the wealthy.

Originally the magical beings were the most powerful until one day their magic was stolen by a man who claimed to be a warlock but wasn’t. He stole their rarest gems and herbs used to make all types of potions. The magical beings who possessed non-potion dependent powers fought back but were killed when the man invented his own cloaking mechanism and defense, the Siren, a gorgeous 3 headed female upper body human, lower body serpent who charmed her prey with soothing lullabies of death.

The man found a way to combine science with the magic and make himself the most powerful magical being alive. He then built a city of his own and over the course of 200 years it has become nothing but wealthy business owners who rule by means of money, power, and his heirs, by magic. The current heirs, the Jacobson’s, are collecting a monopoly of businesses and have kicked all tribe’s men and women from the city. The tribes have received a prophecy from Natalia, the messenger that a savior will arrive on the 1st day of the 7th month born to the founders of the Ruby tribe.

Are you that savior? Will you help the tribe’s get their power back? Will you lead the rebellion against those selfish bastards who took your ancestors magic? OR will you fight your way to the top of the corporate ladder doing whatever it takes to be the next best thing?