The first ever MMO game that I would officially say that I’ve played and had experience with is Flyff. Now I’ve tried several different games like League of Legends (LOL) and World of Warcraft (WOW) but something about Flyff is so simplistic and enjoyable to me that I played it during every school vacation break I got.

*In case you don’t know what an MMO game is, the acronym stands for Massively Multiplayer Online which tend to be considered role playing games in a fantastic world of imaginative creatures and personas. 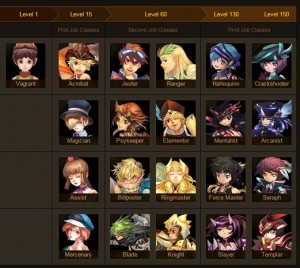 Anyway, when I first got into Flyff I didn’t look anything up online. I just kind of went as the game did and learned from a friend of mine who convinced me to play the game with him in the first place. I already knew the game keys from trying out WOW and LOL on friend accounts and I understood the basic premise that once you get to level 15 you can pick a trade or an entry level class to become a master of a particular skill set. I only took me a few hours to reach the goal of level 15 and once I did my friend chatted me, “what class are you interested in?” I told him, “I’m not sure what that means or how to do it or anything.” So he started listing of a bunch and I was even more confused. Finally it was time to seek help from Google. 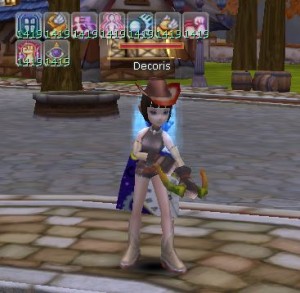 After spending almost an hour reading through Flyff class guides (image above) and gamers experience on discussion boards all over, I decided that my end goal would be to become a Harlequinn or Crackshooter. This meant that I had to start out as an acrobat and when I got to level 60, I would have to choose one mastery class. I haven’t played Flyff in a while but I’m at level 25 or something like that, which mind you is after I had to start all over. Yeah I know. Start ALL OVER. It sucked but it was really because even though I loved playing and showed interest my friend still thought I was only playing to virtually hang out with him so he didn’t take teaching me seriously and I ended up using all my stat points to the wrong details for my skill set.

There are so many things to do on Flyff from completing quest and fighting/killing monsters for gained experience and penya (currency) to buying clothes, makeup, a house, flying boards and broomsticks to randomly running around and collecting things to trade or to keep just because.

Either way, Flyff is pretty dope. Above is a screenshot of my character on Flyff. Check me out online at character name: Decoris or username: rosaballerina94.